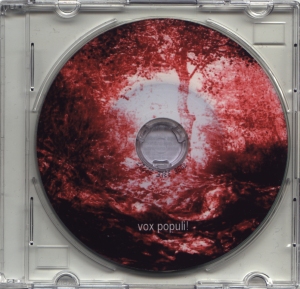 axel kyrou: synth, samples, field recordings, chimes, rainstick, tibetan singing bowl, voice, resonant tubes and objects
thierry: bass on track 2
sonorous waves include : swallows, sheeps with bells, church bells, a sexually oriented frog gathering in royan (france), various diurnal and nocturnal grasshoppers, a plane, a game center in naha (okinawa, japan), the sound environment of the pond of koro (burkina faso), a church organ improvisation recorded from outside (twisted a little), and finally the sound of silence.
koro is the realization of a musical fantasm of mine : serving the musical beauty of the natural world. there, each sound is separated but always relates to one another.
dedicated to all the animals featured.

vox populi! is an adventerous french band, born in the early 80s. their sound incorporates elements from psychedelic musics, persian folklore and all kind of elevating sound form. they had numerous releases during the 80s including a split-lp with h.n.a.s. and contributed to tons of cassette-compilations. recently, a collaboration-cd with pacific 231 (featuring both old & new tracks) was released by monochrome vision.
"soft entrance to nature's camino de luz" is mostly an axel solo work in a more experimental/surrealistic/environmental vein. instruments include synthesizer, shruti box, chimes, tibetan singing bowls, raining stick, bass, resonant tubes, field recordings and tape manipulations. dedicated to all the animals featured (and there are many!).