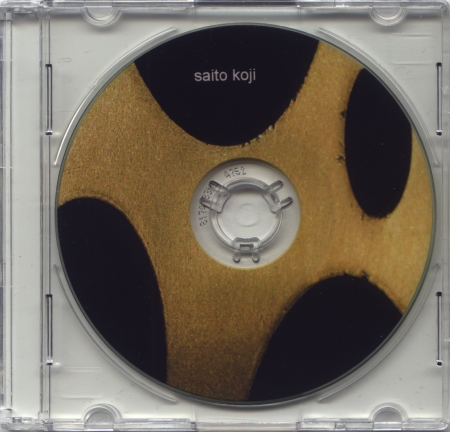 SAITO KOJI creates trance-inducing soundscapes based on guitar and effects. some of his past released were issued by gears of sand (ben fleury-steiner's label) or resting bell (one of the most interesting netlabels).
his music is so hypnotizing you'll only have one thought at the end of this 3": press 'play' again!

Vital Weekly
Four new releases in the ever expanding horizon of Taalem, and curious enough all four are by Japanese musicians. [...]
Saito Koji already released on Gears Of Sand and Resting Bell. He too plays guitar and sound effects and fits Nature Of Dislocation perfectly. One piece though here that sounds like a choir of angels (appropriate for the time of the year I'd say) and also heavily based in ambient land. Another damn fine piece, executed with great care, but also one that is perhaps a bit too much based in tradition. Not bad as such though. It carries on the tradition, I'd say. (FdW)

Gothtronic
Saito Koji finishes of my batch of the four Taalem releases, all works from Japanese artists. [...]
The music on ‘Prayer’ seems to start immediately the ‘Elements’ left of. Almost no fade in, immediately into the sounds. The music on this release delivers one song of around 23 minutes. The track doesn’t have very much noticeable variety, but it’s also really meant for headphone listening to pick up all the little nuances.
‘Prayer’ is a very trance-inducing release which should give you some ear pleasures for some 23 minutes. Then there’s nothing else to do then to press play again. Highly recommended. (Fabian)

Temporary Fault
Can’t remember if I already reviewed the second-to-last batch that Jean-Marc - boss of this label devoted to contemporary ambient and relative derivates - had sent me earlier (hopefully yes and, in any case, thanks JM!). Yet I managed to listen to these four several times, in different conditions. Speakers are highly recommended for all these 3-inch CDs. [...]
A plastic miniature replica of the perpetual looping brought to fame by William Basinski made with guitars and effects, superimposed and layered for 23 minutes. It goes on and on without changing, aesthetically acceptable but meaning absolutely nothing in terms of artistic weight. Useful (hardly) as a background wallpaper – which indeed is what ambient should always be, right? Frankly, I myself could release three CDs of similar stuff a day and maybe my economy would be a little better. Real prayers - and real music, which is the same - are completely different matters, you know. (Massimo Ricci)

Chain D.L.K.
Saito Koji's 6th release is presented here, entitled 'Prayer.' It is one 23 minute piece of ethereal, ambience. It continues the entire 23 minute span almost completely unchanged. Only very subtle tones and textures are introduced and faded away into thin air throughout the piece. It is very light and angellic in nature and could very easily be a backdrop for prayer, meditation or Raiki. Let this one envelope and flow over and around you as you breathe deep and exhale slowly. (Barton Graham)