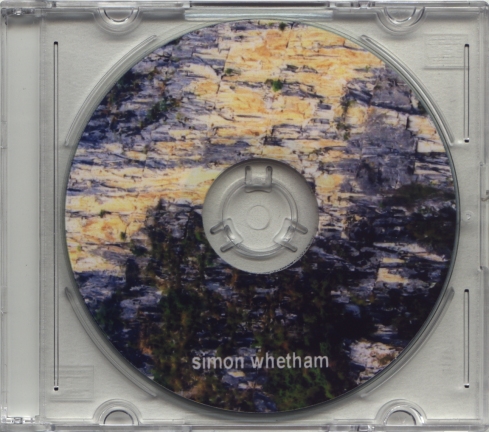 with past releases on various international labels like trente oiseaux, entr'acte, install, mystery sea, conv, dragon's eye recordings or the very recent "she floated away..." on kaon, SIMON WHETHAM's music can easily be classified as field recordings based.
using recordings made in south wales, WHETHAM has composed here a very subtle and detailed 24min long piece which will reveal its richness listenings after listenings...

Vital Weekly
[...] Simon Whetham does have his own voice, as his work is principally based on the use of field recordings. Here he has a piece that is based on field recordings from Manorbier, South Wales in 2009. A twenty-four minute (hey even that fits a 3"CDR!) work of very subdued tones, in which it is hard to recognize any sort of field recordings. A dark of work of what I think to be heavily processed sounds. Much equalisation has been used it seems. What remains is a very nice, very dark work of droning residual matter. It could be water, or perhaps wind, or a combination of both. Not his best work but certainly another fine one. [...] (FdW)

Norman Records
This artist has had releases on Trente Oiseaux, Entr'acte, Install, Mystery Sea and Dragon's Eye Recordings amongst others. 'Velvet' is comprised of a single twenty-seven [actually, twenty-four] minute composition which was achieved through field recordings in South Wales. It's very difficult to identify the sound sources as things flow in a very subtle way and gradually reveal detail, as sounds in the distance barely emerge. This requires attention and appreciation of the subtleties of the sounds around us. This will appeal to some folks that dig the more minimal compositions on the Dragons Eye label. (Ant)