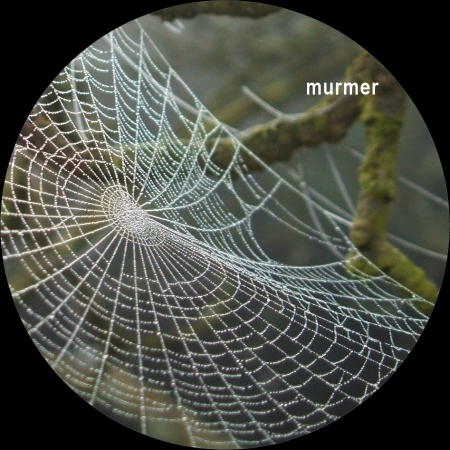 "liquid solid" was originally composed in 2000, released by absurd records on the album "definition" in 2003.
the source recordings were made on minidisc and reworked on old cassette 4-track.
in 2010, as a sort of game, or perhaps exercise in concentration, i decided to recreate the piece as closely as possible using the original source material and the computer techniques i hadn't had 10 years previous.
this is the result.
this piece is dedicated to gordon.
photography : patrick mcginley

patrick mcginley, alias MURMER, is an american sound artist living in europe since 1996. now establisehd in estonia (like his friend john grzinich), his work has always been based upon found sounds and found objects. his work concentrates on the framing of sounds from our environment which normally pass through our ears unnoticed and unremarked but which out of context become unrecognisable, alien and extraordinary.
his past works were published on various labels like ground fault recordings, icr (a collaboration with jonathan coleclough), drone records or helen scarsdale agency. he's also a member of the REVENANT collective (together with john grzinich, yannick dauby, hitoshi koji and many others) and has a weekly radioshow named "framework" devoted to field recordings.
"specular reflection (liquid solid redux 2000-2010)" is a kind of experiment for patrick, he has recreated an exquisite drone track from 2000 (previously released on a cdr published by absurd) with modern techniques, as opposed to the rawer material he had at the time. rain sounds, bells, let yourself immerge in "specular reflection"...

Vital Weekly 837
A new trio of releases on Taalem, a label specialized in 3" CDRs of drone music and all things otherwise atmospheric. [...]
Patrick McGinley has been around as Murmer (or murmer as he prefers it) since 1996, using found sound and found objects, and his work 'concentrates on the framing of sounds from our environment which normally pass through our ears unnoticed and unremarked but which out of context become unrecognizable, alien and extraordinary'. His release has one piece and its a recreation of a drone piece from 2000 (which was released by Absurd back then, see Vital Weekly 372) but then with modern techniques, which make it possible to do a more refined piece rather than the rawer material he had back then. It uses rain sounds and bells. Its a fine piece, very Murmer like. Minimal, austere, changing very gradually over the course of the piece and making a small crescendo at the end. A rather solid piece in its approach. Nothing new for Murmer, not the best work in his catalogue, but just a fine, sturdy addition to what we already know and that's fine too. [...] (FdW)

Culture Is Not Your Friend!
I think that the most intense aspect that comes to mind while listening to Murmer is the tiny sound crashes that give the album an older feel. I strongly cling to it throughout the twenty minutes of this mini album, as it helps me gain confidence about my hearing and comprehension of the music that plays beneath these sharp needles of sound. How so?
Well, at first, the one track mini album might sound soft and caressing, but I personally think it actually goes in a different direction, as it shapes itself to match the decaying sounds of a traumatized ear. I remember the moments it takes the ear to regain its inner peace after being hit by an extremely loud sound; there is a slow, numbing process in which the ear regains its equilibrium, and Murmer seems, at least in my mind, to take that process and expand it into a twenty minutes odyssey of eerie, beautiful sounds that melt together into an abstract, gentle stream.
On this endless landscape, the cracks and crashes that disturb this homogenous, primordial soup become the subject of the dark matter in this specular reflection.
This deep, enchanting mini album is a fine release by the proficient Taâlem label. I don’t know who this Murmer is, but I would certainly like to hear more from where this came from.